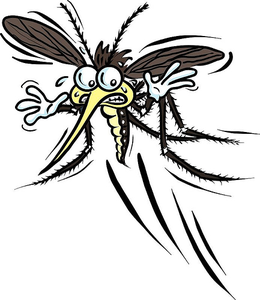 Two items of good news regarding pests in Maine:
1) there are no poisonous snakes.
2) if it weren't for all the insects, there wouldn't be all the birds.


Black flies and mosquitoes are the top two complaints among Maine birders, but both are controllable problems. Everybody in the world knows about mosquitoes, but Maine's Black Fly comes as a sorry surprise to some. This relative of the mosquito also requires blood to reproduce, but rather than suck from an injection, the black fly lacerates the skin and laps its fill. For those unused to it, the bites are sometimes more irritating and lasting. Furthermore, they are harder to deter with head nets because they will land on clothing and crawl under the hood and up sleeves. At their worst, they swarm in distressing numbers. However, they are deterred by repellents. They also prefer the cooler weather of spring, so they seldom linger beyond June. They hatch out about a week earlier than mosquitoes and may be expected from mid-May to the beginning of July. Sometimes there is a second hatching in August. They are less prevalent in cities and along the ocean shore.

Maine's mosquitoes are no worse than many other places. Indeed, compared to the Florida Everglades in wet season or the summer arctic, they are merely annoying. They may swarm during a day of birding in May and June, as well as the hours of darkness in mid-summer. They, too, are controllable with repellents, and they are much easier to deter with head nets and hooded sweatshirts, or even a good sea breeze. Their annoying whine is often worse than their bite.

The no-see-um is sometimes called a midge in other northern regions, though "midge" is a name given to a variety of biting insects. It is less than an eighth-inch long and most victims don't even know the culprit is around until they feel the slight itching of a bite in progress. The itch seldom lasts long and these critters are merely a minor nuisance except when camping. They can make a night in the sleeping bag miserable if they sneak into the tent. No-see-ums are nocturnal and can not stand even a slight breeze, so they are seldom encountered while birding.

Horse flies and deer flies prefer hotter weather and, of the two, deer flies are more numerous by far. They don't usually become a problem until the dog days of summer. Their bite is painful and annoying, but it is their incessant buzzing around the head that is most distracting. They much prefer biting the highest point of their targets and are easily deterred by a hood or hat.

Ticks are a growing problem. Blame global warming for their continued movement north. At present, they are still largely confined to the southern coastal areas. "Wood" or "Dog" Ticks are the largest. They readily feed on humans but are also the easiest to detect. "Deer" Ticks are smaller - about the size of a pin head. These are the ticks that carry Lyme Disease. The early signs of the disease show up as a rash at the bite site and then flu-like symptoms. Untreated cases may lead to arthritic conditions and possible neurological problems. Not all deer ticks carry Lyme disease and a tick must remain attached to the host for at least 24 hours in order to cause infection. Repellants are available, but tucking pant legs into boots and socks continues to be an effective approach in tick-prone areas.

Maine has its fair share of stinging insects. Bees, wasps, and yellow-jackets are common in summer. The latter is the most aggressive around sweet liquids. Otherwise, they all tend to leave people alone. Honeybees are commonly brought in to pollinate corps, particularly blueberry fields. While out upon blueberry barrens in late May and early June looking for Upland Sandpipers and Vesper Sparrows, expect to see swarming hives surrounded by electrified fences to keep the bears out.

Poisonous plants are largely confined to Poison Ivy. Poison Oak and Poison Sumac are seldom encountered but Poison Ivy proliferates along roadsides and stream edges in a few places. Some offshore islands are completed covered in it. It also comes in ground-creeping, tree-vine, and high bush forms, so it is rather widespread. Fortunately, it is also rather noticeable. Its bright green color and "leaves of three" are well-known to sufferers.

Now the really good news: While winter birding at 20 degrees below zero, you will seldom encounter any of these pests!