Maine - a multi-faceted gem
forged by nature, chiseled by glaciers, polished by time. 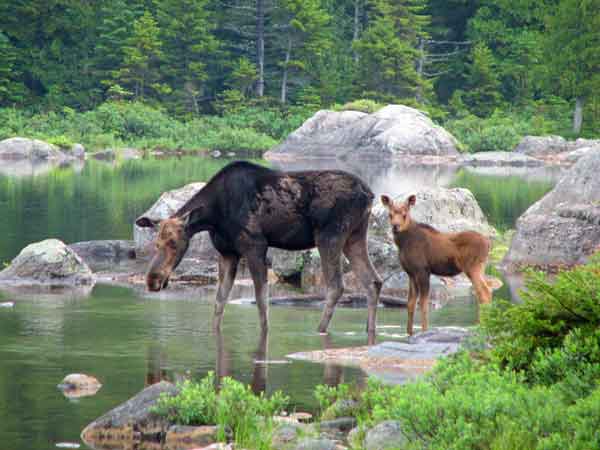 Forest
Deciduous forests prevail in the southern and central interior parts of the state. Boreal forests begin to appear farther north, particularly in parts of Baxter State Park and the North Maine Woods. Maritime forests and cedar swamps along the downeast coast provide similar habitat for boreal species. These forest types mix at transition points, and birds of the different habitats can be found close together.

Coast
The coast, too, is in transition. The extensive sand beaches of southern Maine give way to the "rocky coast of Maine" just north of Portland. But there are enough rocky capes along the coast of southern Maine that species overlap. It is possible to find a sand-loving sanderling with rock-loving purple sandpipers. And though the salt marshes and estuaries of southern Maine are extraordinary for shorebirds in late summer, the mudflats uncovered by the huge tides of downeast Maine are equal. 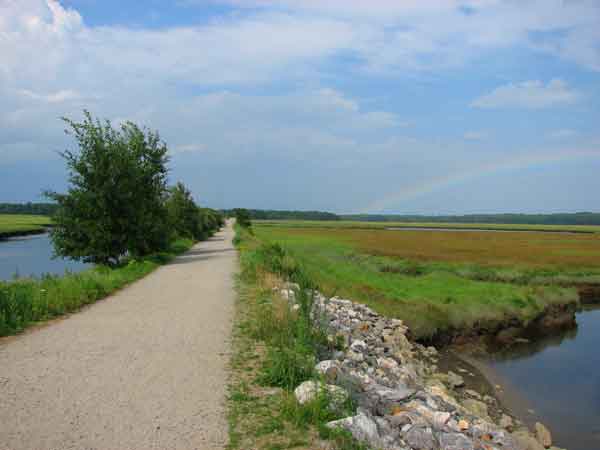 Marsh
Salt marshes and freshwater marshes coexist along the entire coast and many species are equally at home in both. Saltmarsh Sparrows and Nelson's Sparrows both breed here. They overlap, and even hybridize, in places like Scarborough Marsh and Weskeag Marsh. In fact, Maine is the northern limit of many southern species and the southern limit of many northern species. 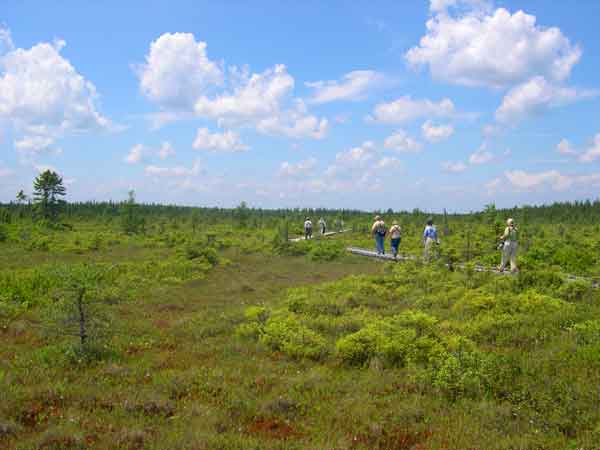 Bogs
Many ponds and depressions left behind by glaciers eventually filled in with decayed matter. These unique habitats are found throughout Maine, especially north and east. Poorly drained and wet, tree growth is stunted, and only a few plant species can survive. Lincoln's sparrows and palm warblers favor them. In the black spruces and tamaracks that grow around them, spruce grouse, yellow-bellied flycatchers, and northern warblers thrive. 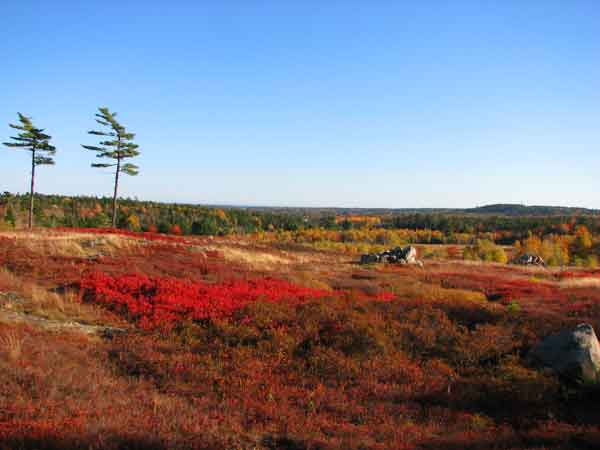 Barrens
Melting glaciers also left many outwashes of sandy, well-drained soil. These plains today are ideal for growing blueberries, and the largest low-bush blueberry fields in the world are in Washington County. Upland sandpipers, vesper sparrows, and other grassland sparrows inhabit these barrens. In the offseason, it's a good place to find snow buntings and horned larks. 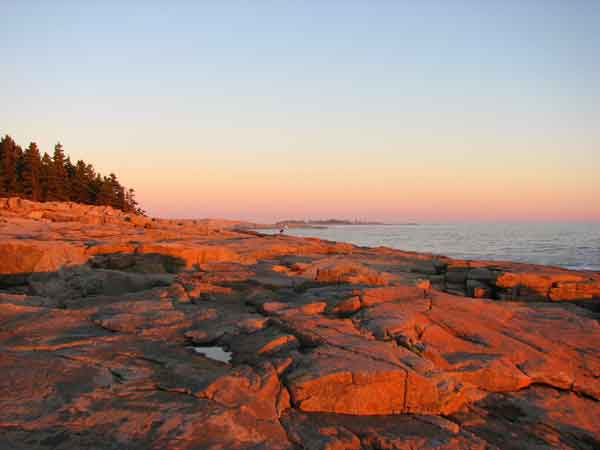 Islands
Some islands, and even a few mainland parks, are notorious migrant traps. For instance, Monhegan Island is the destination of choice for international bird tour groups because of its propensity for attracting off-course migrants. Several islands are ideal for nesting, where Atlantic puffins raise their young under the protection of common, arctic, and roseate terns. Colonies of common murres, razorbills, and black guillemots dot some of the same the islands. 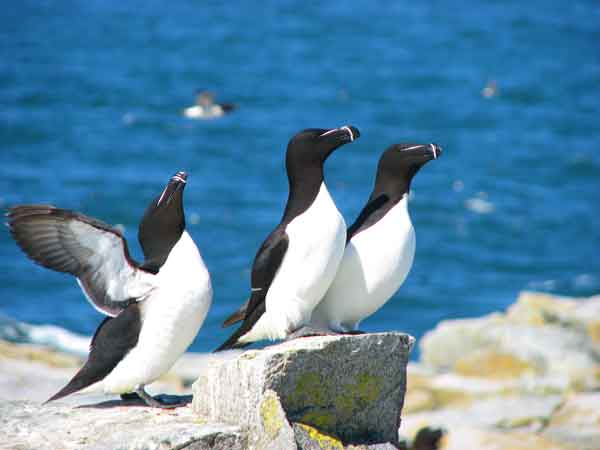 Offshore
The warm waters of the Gulf Stream bypass the icy waters of the Gulf of Maine, making it a natural factory for producing sea life. Maine's lobster industry is world-famous, and these same cold conditions produce abundant food for whales and birds. Leach's storm-petrels nest locally, and Wilson's storm-petrels arrive from the South Atlantic in June, along with four species of shearwaters, northern fulmars, northern gannets, marauding jaegers, and occasional skuas. 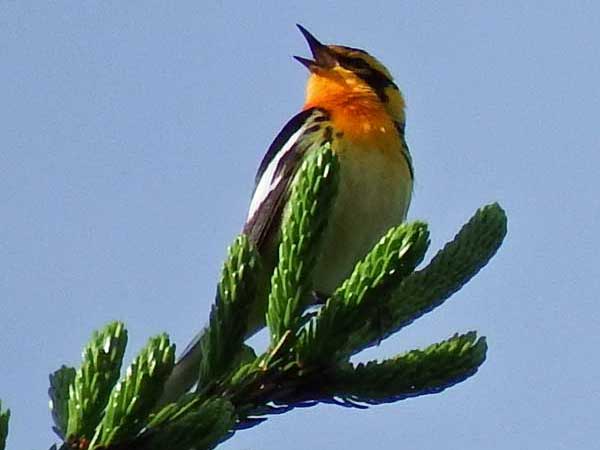 Common Warblers
In breeding season, warblers are everywhere. Yellow-rumped, black-throated green, northern parula, black-and-white, and magnolia warblers are so common it's hard to imagine a day in the field without them. So are American redstarts, common yellowthroats, and ovenbirds. Yellow warblers prefer brushy open areas of the coast, river bottoms, and logging cuts. Chestnut-sided warblers favor secondary growth areas. Listen for pine warblers in the pines, especially near water. Black-throated blue and Nashville warblers are relatively common in mixed forests. Blackburnian Warblers are likely in the canopies of more mature forests. 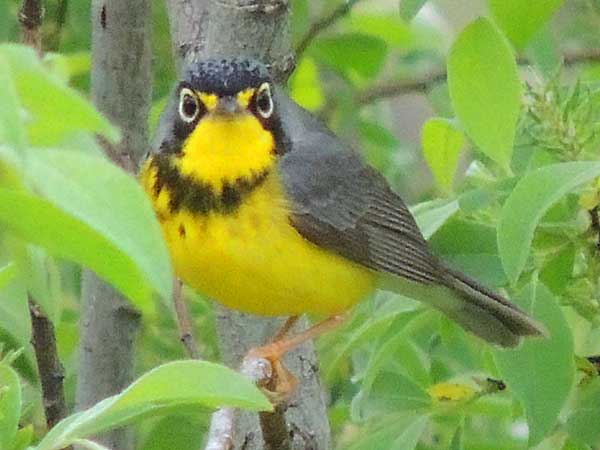 Secretive Warblers
Other warblers share a more limited range. You may have to chase Canada Warblers deeper into wet, tangled thickets. Wilson's Warblers favor the live alders around wet areas, especially in the northern forest. The Northern Waterthrush prefers the upright dead trees of beaver flowages. Blackpolls are relatively late migrants, heading for alpine and spruce forests in the mountains of Western Maine, Baxter State Park, and the North Maine Woods. 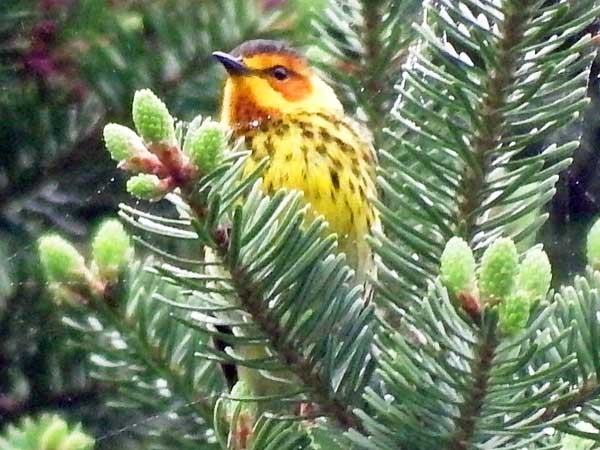 Difficult Warblers
Palm Warblers are one of the earliest migrants, arriving in April. By mid-May, they've already begun to disappear into their boggy breeding grounds where Tennessee Warblers are also infrequent breeders. Cape May Warblers prefer the tall conifer forests and edges more common to northern Maine, while Bay-breasted Warblers prefer denser stands of low conifer in the north. Mourning Warblers are present in the deciduous ravines and tangled brambles of northern Maine but challenge even the best local birders to find them. In contrast, the range of Prairie Warblers barely extends into southern Maine, and they are seldom encountered north of Augusta.

Vireos
Red-eyed Vireos are present in all mature woods. Where woods are not fully mature, Blue-headed Vireos predominate. In a day of spring birding, neither can be missed. Warbling Vireos are present in open deciduous areas, especially bordering on farm and pastureland, and wetland edges. Philadelphia Vireos may be encountered in migration, but seemingly disappear into their forested breeding grounds, often around the base of mountains in northern Maine. Yellow-throated Vireos breed in a few areas of southwestern Maine, especially Brownfield Bog. 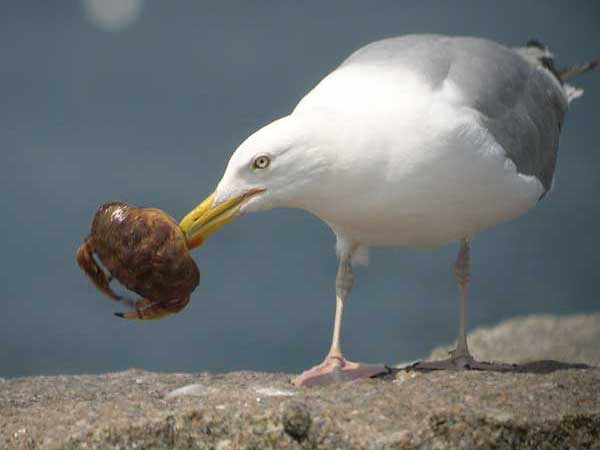 Gulls
Herring, ring-billed, and great black-backed gulls are unmissable. Laughing gulls are limited to salt water. Bonaparte's gulls are locally common downeast, after breeding farther north. Black-legged kittiwakes nest between the US and Canada along the downeast coast, and they can roost by the hundreds within easy view. Iceland and glaucous gulls are present but uncommon in winter. The culprits that get the attention of Rare Bird Alerts are common black-headed gull, lesser black-backed gull, and little gull.